Throughout its history, the United States hasn’t been afraid to dream big. Massive engineering projects like the Transcontinental Railroad and the Hoover Dam were decades ahead of their time. Once complete, they inspired generations of Americans — and people from all over the world, too. 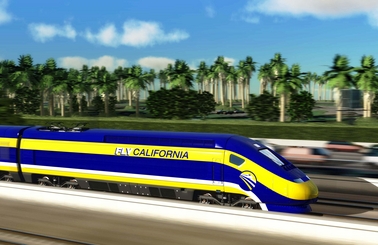 Sadly, budget cuts and political dysfunction have reduced the scope of U.S. transportation projects in recent years. But some people are still reaching for the stars. These five high speed transportation initiatives could inspire a new generation of American engineers, architects and — yes — politicians.

In the late 2000s, the Obama administration unveiled an ambitious vision for a high-speed rail network that could connect virtually every major city in the United States. For various reasons, the envisioned network won’t be built anytime soon. But two long-distance corridors hold significant promise: the California High Speed Rail line, which will eventually link San Francisco and Los Angeles, and All Aboard Florida, which will link Miami and Orlando. The Florida line will be built first, with trains reaching a maximum of 125 mph on the three-hour journey between the two cities. The more ambitious California network won’t be done for more than a decade, but it will be truly impressive — its trains could speed along at more than 200 mph.

A shorter, entirely privately funded high-speed rail initiative called ZipRail may soon bridge the 100-mile gap between Rochester, Minnesota (home of the world-renowned Mayo Clinic) and the Twin Cities metro area in 30 minutes or less. The project is an important test for privately funded rail initiatives. If successful, it could pave the way for entrepreneurs to construct similar spurs between major cities and smaller satellite towns, possibly with seed funding from wealthy institutions like Mayo.

The border crossings near San Diego are obsolete and overcrowded. In response, the federal government is in the process of planning and constructing an ambitious new crossing called Otay Mesa East, which would sit in the rugged desert outside the San Diego/Tijuana region. The crossing would alleviate the Interstate 5 crossing’s famous congestion and allow truckers to enter and exit the United States more quickly and efficiently. That, in turn, would boost trade between Mexico and the U.S. at a time when both countries’ economies sorely need it.

Chicago’s O’Hare International Airport was once the country’s busiest, though it has since been passed by Atlanta’s Hartsfield-Jackson International Airport. Still, its central location and vast cargo-processing capabilities make it a natural logistics and passenger hub. But local authorities aren’t satisfied. They’ve already added a new air traffic control tower and runway, and they’re in the process of adding two new runways — plus a slew of ancillary infrastructure, terminal space and cargo bays.

The most ambitious project on this list might be the one that never gets built. Known as the Hyperloop, it’s adapted from a proposal by SpaceX and Tesla founder Elon Musk. The goal: to connect far-flung cities with a system of man-sized pneumatic tubes and capsules that could reach supersonic speeds. The first proposed line would connect Los Angeles and San Francisco; a five-mile test track is currently planned for a remote location in California’s Central Valley. Needless to say, a successful Hyperloop could threaten California’s high-speed rail initiative — but it also might never be built.