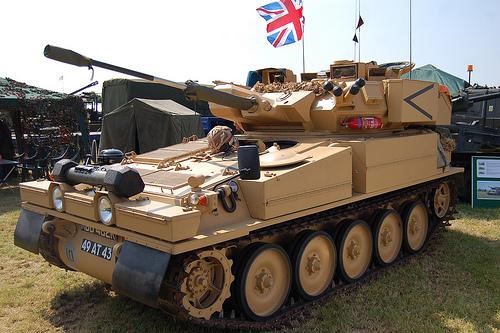 The oldest tank regiment in the world is the Royal Tank Regiment, which was formed during the First World War in 1916. Part of the British Army, it is a section of the Royal Armoured Corps and today is called the 1st Armoured Infantry Brigade. Having seen action in both the World Wars, Korea and Iraq, the regiment has received battle honours for many engagements in these conflicts.

The tank was invented during the First World War and first used in 1916. The Tank Corps was under the command of Hugh Elles and saw much action during the Battle of Cambrai in 1917. These early tanks were still cumbersome, uncomfortable machines that had a tendency to get stuck in the mud. However, they were effective at frightening their enemy. Manufacturers will have had several parts made in a factory and then all put together bit by bit.  Now we would use technology to bend and shape our metals including machinery like Electric Press Brakes sourced from links including http://www.cotswold-machinery-sales.co.uk/euromac/electric-press-brakes/.

The Tank Corps was given a royal title in 1923, making it the Royal Tank Corps and a new motto was attached to them – ‘Fear Naught’. The iconic black beret and unit badge were also first adopted at this time. By the outbreak of World War II, the corps had changed its name to the Royal Tank Regiment with all training taking place at Bovington Camp, Devon. This tank training lasted for approximately eight months.

As the world plunged into another world war, the regiment was made up of 20 battalions, of which 8 were regular and 12 were territorial. All units took part in many conflicts during the course of the war including Dunkirk, El Alamein, Burma and the D-Day landings. Tanks were becoming more efficient, faster and far deadlier than they had been just twenty years previously.

Since the Second World War, the different battalions of the regiment have been reduced in size or disbanded altogether. The tank regiment saw action in Korea during the early 1950s and in Bosnia and Kosovo. Some parts of the regiment were deployed in Afghanistan in 2002 and also during the Iraqi invasion in the capturing of Basra.

Today the regiment is based at Tidworth and the main tank of choice is the Challenger 2 with other options being the Scimitar and the Fuchs. The regimental colours are red, brown and green which, according to the story of where the colours came from, was a bit of a hurried affair. Before the Battle of Cambrai, General Elles wanted a flag for his tank and called into a local shop to see if there was anything he could use. He managed to get hold of silk in the above colours, which was hurriedly sewn together to make a flag which flew from his tank named ‘Hilda’.

Since then it has been suggested that the colours and order signify the struggles of the Corps. The brown at the bottom is the mud, the red in the middle is the blood and the green at the top symbolises the journey to the green fields ahead. Today there are six squadrons as part of the Reaction Force, under the umbrella of the 1st Armoured Infantry Brigade. They are: Ajax, Badger, Cyclops, Dreadnaught, Egypt and Falcon.