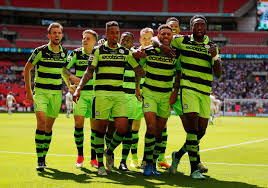 It might not be setting the world on fire – yet – but Forest Green Rovers is certainly a team to watch after being promoted to the Football League courtesy of a 3-1 win against Tranmere in the National League 2016/17 Play-Off Final at Wembley. They currently play in League Two and each year they go from strength to strength.

Whether you are looking for an up-and-coming team to support or simply some answers to pub quiz questions, here are some neat facts about Forest Green Rovers that you may not be aware of.

A big team in a small town

With its home ground in the Gloucestershire town of Nailsworth, Forest Green Rovers comes from the smallest town of any in the league, with a population of 7,637 as of the 2017 census records. Its current ground, The New Lawn, has enough capacity for almost the entire town – 5,140, with 2,000 seated.

Despite the name, the kit is not Forest Green

If you look for Football Kits from a supplier, you will probably not find a snow cone green, jazzercise green or even bright lime kit; however, looking at the colour of both the kit and badge, any of these would be closer to the truth than Forest Green. Football kits from kitking can be found in a variety of different styles meaning you can find something that suits your team.

Football management with an IT twist

Forest Green’s main sponsor, Ecotricity, is not only contributing money but also a data and analytics-focused mindset from its highly technical business. This is helping the team to grow year after year.

Baseball teams have long taken a statistics and analytics-focused approach, often referred to as ‘moneyball’; now, Forest Green is bringing this mindset to football, using high-tech analytics to drive its player acquisitions. The team can therefore ensure that they have all the skills that they need within the team and can plan their player acquisitions accordingly.

Eco-friendly lifestyles – and not just for the players

In addition to the statistics, Forest Green bases its player recruitment on having a ‘green’ lifestyle, including preferring vegan players. They are a team that live by their values.

It does not end there – Forest Green also promotes an eco-friendly lifestyle for its fans; for example, it made the decision not to serve any meat at its ground.