Humans have been cultivating cotton for thousands of years. In fact, cotton was among the first domesticated crops, and it played a key role in driving the developments of early civilizations in the Middle East and northern Africa. 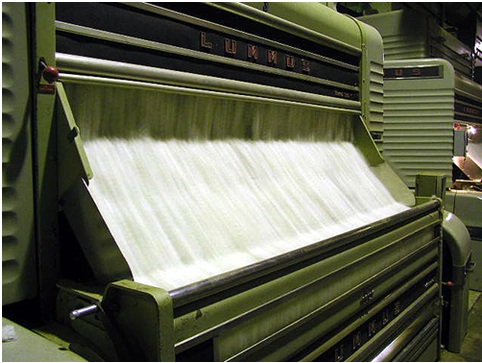 But the cotton plant has long stymied those looking to harness its fruits—both literally and figuratively. The plant’s signature product is the boll, a puffy white ball of fiber surrounding small, tough seeds. Though both the fiber and seeds are useful, it takes a frustrating amount of labor to separate them. For most of history, people took apart bolls by hand, separating fibers used in clothing from oil-rich seeds used in cooking and animal feed. Thanks to a New England inventor named Eli Whitney, the history of cotton production and processing changed forever in 1793.

It’s not accurate to say that Whitney’s cotton gin invention was unique. Previously, people used cumbersome, hand-driven gins that marginally reduced the amount of labor necessary to separate the boll. What made Whitney’s invention different was its mechanical nature. His device could do a tremendous amount of work with relatively little input from human laborers, reducing both the time and the manpower necessary to process harvested cotton. In turn, that reduced the cost of cotton production, turning countless farmers across the American South away from tobacco and rice and toward higher-margin cotton.

What the Cotton Gin Meant for America

Whitney’s gin impacted the American landscape in several ways. First, it sparked a land rush that drove farmers westward from the Carolinas and Georgia into Alabama, Mississippi, Louisiana and Texas. It also drove up land prices, making farmers more prosperous. It helped spark a boom in American manufacturing and exports, as factories around the world clamored for American-grown cotton. And, thanks to falling prices for cotton clothing, it even changed the way Americans dressed.

The cotton gin also made it easier to access another fruit of the cotton plant: the rich oil within its tough seeds. Cottonseed oil, often called “America’s original cooking oil,” became a key aid for frying, sauteing and other cooking techniques. From french fries to fried fish, many popular foods wouldn’t have tasted the same—or even emerged, in some cases—without a readily accessible medium like cottonseed oil.

What It Means for You

Today, even more efficient machines have replaced Whitney’s cotton gin. But his innovation’s impact remains indisputable. Iconic American fashion innovations, including cotton tees and denim jeans, probably wouldn’t exist in recognizable form without it. Some types of food could be less popular, more expensive or both. And a key agricultural sector, one of the Sun Belt’s most important, might not exist at all.

These things could scarcely be imagined in the late 18th century. It just goes to show you that big changes can come in unexpected packages.